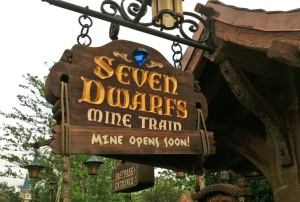 At a special dedication ceremony today at Magic Kingdom Park, Walt Disney World Parks and Resorts Chairman Tom Staggs announced that the “crowning jewel” of New Fantasyland, the Seven Dwarfs Mine Train, will officially open on May 28.

During this morning’s ceremony, Tom was joined by Disney Princess Snow White and the Seven Dwarfs as he invited everyone to celebrate the addition of the final component to New Fantasyland.

“Seven Dwarfs Mine Train is both literally and figuratively the centerpiece of New Fantasyland, so we knew it had to be something special,” Tom said. “The attraction appeals to everyone in the family and provides just the right blend of heart, humor, and thrill while keeping with the charm of this special land.”

The family-style coaster features an innovative new ride system that allows cars to swing back and forth as they travel down the track. The cars are even designed to reflect similar vehicles that appear in the film, handmade of wood by the Dwarfs, shaped by an axe, and used to haul rocks and jewels.

Seven Dwarfs Mine Train also uses the latest in technology featuring some of the most advanced and charming Audio-Animatronics figures we’ve ever created. Adding to the fun, the journey will be accompanied by music from the film classic and scenes filled with Snow White, the Seven Dwarfs and playful forest critters.