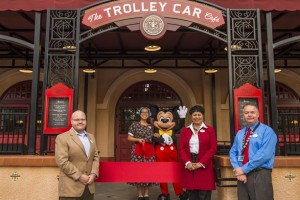 As an update to Disney’s previously announced plans to bring Starbucks locations to the theme parks at Walt Disney World Resort, the newest location this week officially opened – The Trolley Car Café at Disney’s Hollywood Studios.

As shared earlier, the Trolley Car Café is themed to a classic trolley car station and gives guests a sense of atmosphere from early 20th century Hollywood. We have some of the first photos to share from this week’s opening.