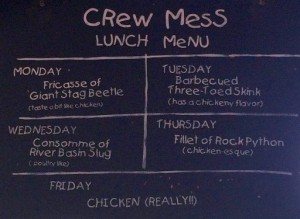 There have been rumors reporting that the new restaurant would be a New Orleans-themed, a la Princess and the Frog…though recently we’ve heard the area just may actually be themed after the Jungle Cruise!

The restaurant would take place at the old Adventureland Veranda, which served as a restaurant for years – with Kikkoman as a corporate sponsor.

Recently the veranda has been used as a character Meet and Greet with Tinkerbell and her Fairy Friends. (Tink and Co. have since flitted over to the Main Street Theater, where you can catch them, along with Mickey and other characters, for aaaaaalllll of your photo op needs.) These days, you’ll frequently spy Peter Pan and Wendy here.

But now, it would seem that this new opening is definitely linked to the snack spot switch reported last week, when Aloha Isle and Sunshine Tree Terrace swapped real estate (and treats).

But back to the restaurant. The backstory for the new spot may include a retreat for Jungle Cruise skippers, or even a secondary source of income for them!

Maybe will be similar to Be Our Guest Restaurant, in that it will offer r quick service and table service dinner.  We can hope….right?

If these rumors are true it is anticipated that the new restaurant could open as early as late 2015.