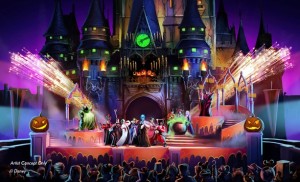 Summer may just be getting started, but I’m already looking forward to fall and the return of my favorite event at Magic Kingdom Park, Mickey’s Not-So-Scary Halloween Party. And this year’s party will be extra fun with the introduction of an all-new show on the Castle Forecourt Stage.

In “Hocus Pocus Villain Spelltacular,” the mischievous Sanderson Sisters from Disney’s “Hocus Pocus” return to the mortal world for one night during the Halloween season. With only a few hours to run amuck, the three sisters decide to use their magic to throw the best, evil Halloween party this side of the graveyard!

With the help of the Disney villains, Winifred, Mary and Sarah gather together sinister shadows, nefarious nightmares and the power of their frightful friends to conjure the ultimate Hocus Pocus Party Potion and cast a spell on everyone in the Magic Kingdom Park. “Hocus Pocus Villain Spelltacular” features appearances by Dr. Facilier, Oogie Boogie, Maleficent and other great Disney villains, along with dancers, projections and special effects that combine to make this new show a not-to-be-missed Halloween treat.