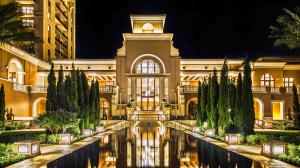 U.S. News & World Report’s annual list of best hotels in Florida is out and two Disney-area resorts made the top 10.

Four Seasons Resort Orlando at Walt Disney World Resort came in at No. 2, while Villas of Grand Cypress, Orlando ranked ninth. Of the two, Four Seasons is located on Disney property in the Golden Oak residential community.

The Ritz-Carlton Orlando, Grande Lakes ranked third in that category, followed by Waldorf Astoria Orlando. This marks the second year in a row Four Seasons took the top spot among best Orlando hotels.

The other non-Disney property hotel in the top 10 was The Alfond Inn. The Winter Park hotel, owned by neighboring Rollins College, came in at No. 8.

In the best hotels in Florida category, Four Seasons Orlando was topped by The St. Regis Bal Harbour Resort. The Breakers in Palm Beach came in at No. 3.