“Pokemon Go” is the craze taking the international community by storm. Between 20-somethings reliving their childhood, kids collecting the cute monsters, and older adults trying to figure out what this “poking game” is, it seems everyone with a mobile device is joining in on the fun. As more and more people experiment with the app, it is becoming apparent that Disney property offers some of the best places to play.

Here’s a quick primer for those who can’t tell a Pikachu from a Pac-Man. And if you’re already a seasoned Pokemon trainer, here are some reasons to bring your device – and a few spare battery packs – on your next Disney vacation.

“Pokemon Go” is a free game app available for iOS or Android smartphones. Players sign up and can immediately begin searching for Pokemon characters, (the name is a blend of the words “pocket monsters”), in the real world using the app.

The app provides players with a bare-bones graphic representation of the real world around you, depicting buildings, streets and parks as colored areas around your on-screen avatar. You can spin the map for a 360-degree view, which will often show you the location of the nearest Pokestops and Gyms. Both are important, and you need to visit them in person to advance very far in the game. 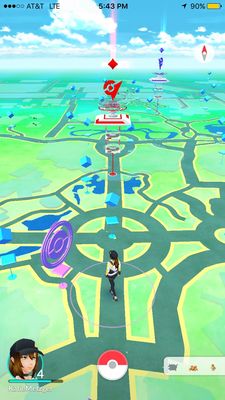 Disneyland as it appears in the “Pokemon Go” app. Photo by Katie Metzger.

The app will also show you if there are any Pokemon characters in the vicinity, and indicates how far away they are. Once you get close enough to a Pokemon, either by walking to where it is or by luring it to you, you will see its icon on your screen. Tap on the character’s icon to open the capture screen.

At this point, the app turns on your device’s camera and superimposes an image of the Pokemon onto the screen, making it appear as if the monster is right in front of you. Players are armed with a stock of Pokeballs, which you toss at the Pokemon to catch it. There are over 100 Pokemon to catch and catalog. 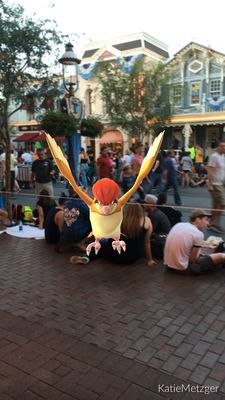 “Pokemon Go” uses the phone’s camera to make it appear that Pidgeotto is flying down Main Street, U.S.A. Photo by Katie Metzger.

Players earn experience points with each capture, and advance a level in the game at certain thresholds. Once a player achieves level 5, they can begin to train their capture Pokemon to battle against other players.

This is very simplified explanation of the game, but the premise isn’t all that complicated. You use the app to track and capture virtual Pokemon characters in your real-world surroundings. Some players are content just to “catch them all,” and some like to get into the more advanced elements of training and battles. But casual players and serious gamers alike will find several advantages to playing “Pokemon Go” at the Disney theme parks and resorts. 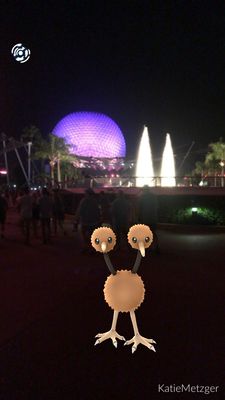 Doduo was spotted near Spaceship Earth at Epcot. Photo by Katie Metzger.

Players visit Pokestops to collect items for the game, including the Pokeballs used to catch the monsters. The game developers used real-world landmarks to build the Pokestops, and says they’re located near “public art, unique architecture, or public gathering places.” The game has caused sparked headlines around the world because of the unusual, unsavory and uncouth places players have discovered Pokestops, including cemeteries, adult-oriented businesses and at the 9/11 Memorial Pool at Ground Zero. 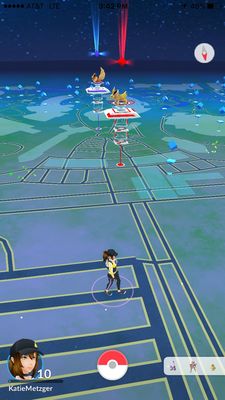 The locations of Pokestops in Epcot’s Future World are indicated with small blue cubes, while gyms are depicted by large icons and an image of the Pokemon that controls it. Photo by Katie Metzger.

Depending on your real-world location, Pokestops may be few and far between. Fortunately for gamers, Disneyland and Walt Disney World are crammed with Pokestops. From Main Street to Downtown Disney, Animal Kingdom to Disney Springs, you can scarcely go a few yards without finding a new Pokestop at every place of interest. Rides, signage, restaurants, shops, and even Audio Animatronics are all fair game. Within a few hours at the park, you may need to purchase an in-game “bag upgrade” for all the items you will collect.

But be warned: some Pokestops are located in backstage areas where park visitors are not allowed. We’ve heard complaints from cast members about players trying to enter restricted areas to capture a Pokemon or access a Pokestop. 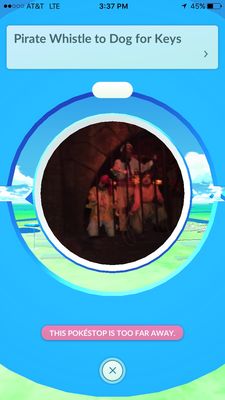 There are dozens of Pokestops located inside Disney attractions, like this one inside Pirate of the Caribbean at the Magic Kingdom. Photo by Katie Metzger.

This phenomenon is certainly not limited to Disney theme parks, and some park operators have taken to social media to warn players to follow the rules. Philadelphia’s Kennywood Park used Twitter to post a stern warning to players, but has also shared photos of monsters caught in the park.

We contacted the Disneyland Resort to see if the company planned to issue similar guidelines, but did not receive a response before publication. So far the company has been silent on the topic, but we wonder if Disney plans to request that game developers remove these backstage locations from the game.

Pokestops usually include the name and a picture of the location, often accompanied with a short description, and we suspect Disney isn’t thrilled with having some of that information made public. There are also some designations that Disney may take exception to, including one Pokestop which is named “Foxy Brown” after an animatrionic figure inside Spaceship Earth. 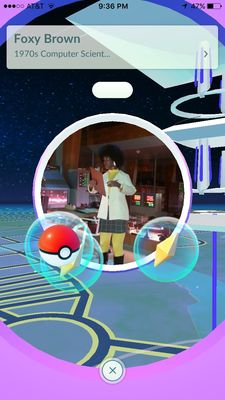 One Pokestop is located inside Spaceship Earth at Epcot, anchored to an animatronic figure. Photo by Katie Metzger. 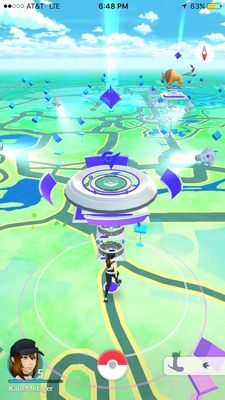 Disneyland’s Haunted Mansion is a gym in the “Pokemon Go” game. Photo by Katie Metzger.

Although never as abundant as Pokestops, the Disney theme parks have many Gyms in a relatively small area. These are great places both to increase your team’s prowess and train your Pokemon. Both Sleeping Beauty Castle and Cinderella Castle are gyms, as are notable attractions like the Haunted Mansion (both coasts); Pirates of the Caribbean (Magic Kingdom); Tower of Terror (both coasts) and Spaceship Earth (Epcot).

Be warned, these theme park gyms are very competitive, and you should not attempt to claim them without a properly trained team of powerful Pokemon.

The Disney parks have many different geographical features, including abundant water features, desert landscapes and even artificial graveyards, which increases the type of Pokemon that can be caught. The theme parks also seem to be popular place for people to use lure modules, which attract Pokemon to the trainers around a specific Pokestop for a half hour. (Hint – if a Pokestop on the map appears to be raining confetti, that’s a great place to hang out and wait for Pokemon to come to you.) 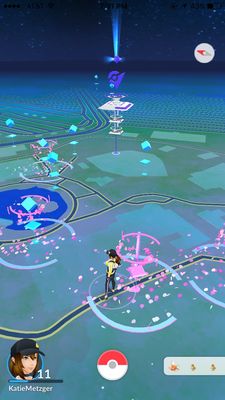 When you see a Pokestop that appears to be raining confetti, head on over and take advantage of the lures set by other players to draw Pokemon to that location. Photo by Katie Metzger.

I was only able to play in Epcot for about thirty minutes, but in that time alone I caught Nidoran, Magikarp, Pidgey, Zubat, Weedle, Venonat, Doduo, Bellsprout, and Nidorino. 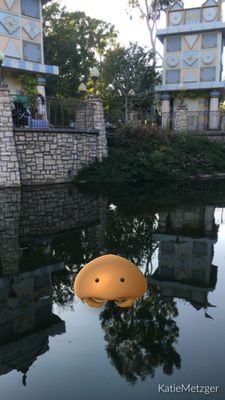 Kabuto was captured near a water feature near “it’s a small world” at Disneyland. Photo by Katie Metzger.

Consider it a new attraction

It’s a sure bet that there are more people playing “Pokemon Go” than Disney’s own Sorcerers of the Magic Kingdom game on any given day. The game is a great way to pass the time while waiting in theme park lines, especially during summer vacation season.

Like the much missed Legends of Frontierland in Disneyland a few summers ago, “Pokemon Go” is an excellent and fun time eater. It keeps you moving and having fun no matter how crowded the parks are.

While it’s true that the majority of Pokestops and gyms are inside the theme parks, there is lots of Pokemon action available outside the gates. Downtown Disney (California) and Disney Springs (Florida) have plenty of Pokestops, and even water features to draw some of the rare monsters. Plus, you’ll likely find a large gathering of players at night and on weekends, which usually means someone will be setting lures that you can take advantage of.

Many players admit they are coming to the Disney theme parks for the sole purpose of playing the game. The game had only been released for a few days when I spotted several people dressed as Ash Ketchum (the main human character of the Pokemon universe), gripping their smart phones and wandering Disneyland in search of monsters.

Between fighting at Gyms and searching for an elusive Pokemon, you are bound to run into other guests and Cast Members playing “Pokemon Go” at the same time. Even though gym competition is stiff, everyone is happy to share tips, recommend locations for finding certain Pokemon, and help out new players.

Just please, keep your eyes on where you’re walking so you don’t literally run into another player – or a Main Street vehicle. It’s all fun and games until someone falls into Paradise Bay.