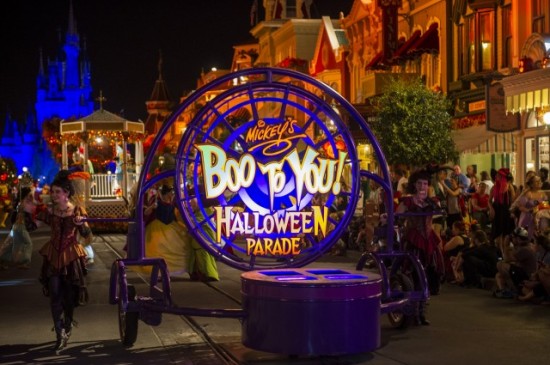 The first Mickey’s Not-So-Scary Halloween Party for 2016 will be held this Friday (September 2nd) at the Magic Kingdom. Here is a look at the entertainment schedule, dining, attractions, and trick or treat locations to help you plan your night.

The event begins at 7:00 PM and ends at midnight.  Party ticket holders can enter the park as early as 4 PM.

The hugely popular Hocus Pocus Villain Spelltacular show at Cinderella Castle that debuted last year will be performed three times during each party at 9:15 PM, 10:40 PM  and 12:00 AM. Starting on September 16th there will be an additional show at either 8 PM or 7:45 PM.

Special merchandise and treats are back, with a special edition MagicBand, a special edition Trading Pin, and of course the event T-Shirt. Guests can get these at the Emporium. The Trading pin can also be found at Big Top Souvenirs.

No FastPass+ will be available