Tony and Academy Award winner Alan Menken will present his solo show, A Whole New World of Alan Menken at Disney’s upcoming D23 Expo. The composer will offer audiences performances and anecdotes capturing his illustrious career July 16 at 1:30 PM and 5 PM in Hall D23 of the Anaheim Convention Center. 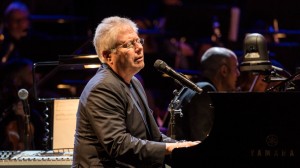 The show, written and performed by Menken, will be directed by Richard Kraft, who helmed The Little Mermaid in Concert and the upcoming La La Land in Concert: A Live-To-Film Celebration—both at the Hollywood Bowl.

With eight Academy Awards, Menken holds the record for most wins for any living individual. He picked up Oscars for both Best Original Score and Best Original Song for his work on Pocahontas, Aladdin, Beauty and the Beast, and The Little Mermaid. In 2012, he won a Tony Award for his score for Newsies, based on the 1992 movie musical. His additional credits include Little Shop of Horrors, Leap of Faith, Sister Act, and the new musical A Bronx Tale on stage, as well as Tangled, Enchanted, Hercules, The Hunchback of Notre Dame, and Galavant on screen.

A Whole New World of Alan Menken received its world premiere in September 2016 at the Segerstrom Center for the Arts in Costa Mesa, California.