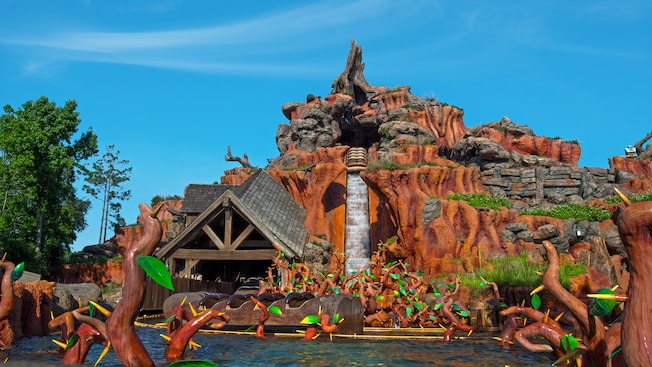 Earlier today Disney announced that Splash Mountain at both the Magic Kingdom and Disneyland will be re-themed to “Princess and the Frog.” The version of the attraction located at Tokyo Disneyland will retain the “Song of the South” theme…for now.

From the Disney Parks Blog where the announcement was made –

The theme is inspired by an all-time favorite animated Disney film, “The Princess and the Frog.” We pick up this story after the final kiss, and join Princess Tiana and Louis on a musical adventure – featuring some of the powerful music from the film – as they prepare for their first-ever Mardi Gras performance.

Tiana is a modern, courageous, and empowered woman, who pursues her dreams and never loses sight of what’s really important. It’s a great story with a strong lead character, set against the backdrop of New Orleans and the Louisiana bayou. In 1966, Walt himself opened New Orleans Square when it became the first new “land” added to Disneyland park, so it feels natural to link the story and the incredible music of “The Princess and the Frog” to our parks

The voice of Princess Tiana and Tony Award-winning actress, Anika Noni Rose, shared, “It is really exciting to know that Princess Tiana’s presence in both Disneyland and Magic Kingdom will finally be fully realized! As passionate as I am about what we created, I know the fans are going to be over the moon. The Imagineers are giving us ‘The Princess and the Frog’ Mardi Gras celebration we’ve been waiting for, and I’m here for it!”

Charita Carter, the senior creative producer leading the project at Walt Disney Imagineering shared, “Like Princess Tiana, I believe that courage and love are the key ingredients for wonderful adventures. I am delighted to be a part of bringing this fun-filled experience to our guests.”

As part of the creative development process, conceptual design work is well underway and Imagineers will soon be able to conduct preliminary reviews and develop a timeline for when the transformation can start to take shape.

According to reports, Disney Legend and former Imagineer Tony Baxter, who designed the original Splash Mountain, will be brought out of retirement in order to serve as a creative designer on the new “Princess and the Frog” attraction. “Following conversations with Imagineering’s leaders about the new attraction’s scope and resources, I had a great sense of reassurance, the attraction will be one to be proud of, bringing to life places, characters and music from the animated classic The Princess and the Frog…I look forward to being a part of a new adventure in Disney magic and fun!” said Baxter about the overhaul.

Imagineer Scott Trowbridge, lead on Star Wars: Galaxy’s Edge, stated on Twitter that he’s “been stealth working on this for quite a while and happy to finally share!”

While the current attraction has been controversial at times, mainly because the attraction is themed to a movie that many, if not most younger guests have never seen and Disney has refuses to re-release in any form in the United States, the re-theming will also likely be controversial.  While it is comforting to see that key imagineers like Carter, Trowbridge and Baxter associated with the re-theming, there is probably going to be a certain portion of the Disney fan base that will say that Disney is buckling to protests.  As stated above, Disney says that this is not the case, but I’m not sure that will placate some people, especially with the timing. There is also a certain portion of the Disney fanbase that are as we shall say, “reluctant to change.” These fans aren’t likely to be happy.

Though on the other hand, a lot of people will be very excited about this news.  The movie is very popular.

The one problem that I see is that Disney appears to be solving one theming problem with a new theming problem.  They’re replacing a controversial theming of the attraction with a theming of the attraction that isn’t controversial, in fact very popular, but will the theme fit into the respective lands that it will reside in.  Does this theme fit into Frontierland…maybe, but what about Disneyland’s Bear Country?

Because Disney is still working on a timeline for the re-theming, we’re don’t know if the current attraction will open when the US parks re-open.  Will fans of the current theme be able to get a “final ride” before it goes away to be re-themed.

How do you feel about this announcement?

Me…I’m cautiously optimistic.  I think “Princess and the Frog” is a wonderfully fun movie.  I’m sure Imagineering will do a wonderful job. I’m sure it will be beautiful.  I’m just a little confused as to the why.