Disney has stated that reservations for dinner at Boatwright’s Dining Hall open on December 2nd.

Returning to the menu will be the all-you-care-to-enjoy Chef’s Platter featuring ribs, Nashville hot chicken, smoked sausage, and barbecued beef brisket with mashed potatoes, mac & cheese, street corn, and green beans. Also on the menu is General Fulton’s Prime Rib or the Deep-South Shrimp and Grits, the signature Boatwright’s Jambalaya and the plant-based Boatwright’s Harvest Jambalaya. 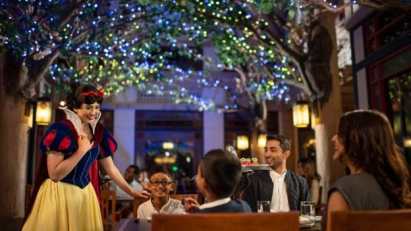 Meanwhile over at the Wilderness Lodge, more character dining will be returning with the re-opening of Storybook Dining at Artist Point.

As part of the new Character Dining experience that is happening all over property, guests will see Snow White, Dopey, Grumpy, and The Queen stroll through the Enchanted Forest while enjoying a prix fixe dinner with the choice of individually plated entrées and shared starters and desserts.

Returning will be the Royal Prime Rib Roast and the vegetarian A Stroll Through Nature along with the “Poison” Apple dessert with dark chocolate-apple mousse.

Pricing for dinner is $60 for adults, and $39 for children. Reservations can be made from December 2nd.