D23: The Official Disney Fan Club announced its new slate of events, and there’s more magic in store for fans all around the country than ever before.

Starting with the parks, D23 will be celebrating the 20th anniversary of Disney’s Animal Kingdom with a special in-park event next April. Plus, the club will invite members to experience the new Toy Story Land at Disney’s Hollywood Studios and Pixar Pier at Disney California Adventure park. In addition, the club will bring back its signature Sip & Stroll and holiday events to Walt Disney World Resort.

As if that wasn’t enough, next November, at Disney’s Contemporary Resort, D23 will hold Destination D: Happy Birthday Mickey Mouse, a two-day party with panels, presentations, a pop-up shop from Mickey’s of Glendale, and an all-new exhibit from the Walt Disney Archives—all in honor of the 90th anniversary of the “leader of the club.”

In addition, D23 will bring back its member screenings—including “Peter Pan,” “Robin Hood,” and “Mary Poppins”—as well as Lunch with a Disney Legend to both the Burbank Studio lot and Walt Disney World Resort. Exclusive tours of the Walt Disney Studios return, and members will be able to enjoy seeing Frozen on Broadway and Aladdin in Los Angeles. And D23 will bring members to Marceline, Mo. to see Walt’s boyhood home—and one of the inspirations for Main Street, U.S.A. More events will be added throughout the year. 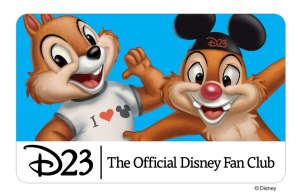 At home or on vacation, D23 Members receive exclusive discounts on shopping, entertainment, and Disney adventures when they present a D23 Membership Card or use special member-only online codes.

D23 Members can enjoy savings throughout the worlds of Disney including:

D23 is bringing back its most popular opportunities for savings on hotels, restaurants, and stores in and around Disneyland and Walt Disney World Resorts, including:

In addition, D23 Members can take advantage of a host of ongoing and limited-time offers developed exclusively for them, including savings on tickets to the Walt Disney Family Museum in San Francisco; a merchandise discount at the Walt Disney Hometown Museum in Marceline, Mo.; 40 percent off all online purchases of H2O Plus merchandise—the luxury skincare product available at Disney Parks; savings at UNIQLO online, including its exclusive line of Disney apparel; 10 percent off all purchases at RIDEMAKERZ®online and at all locations—including the Disneyland 60th Anniversary Limited-Edition RZ Rascar and Rod vehicles available at the Anaheim store; plus 23 percent off all merchandise online from SMS Audio, the official headphones of D23.

Complete details on all D23 Member discounts and offers, as well as a full list of all the latest specials, can be found online at http://D23.com/Discounts. All offers are available to D23 Gold Members; D23 General Members receive access to a select number of discounts.

In 2015, D23 will bring back many of its beloved events while adding a selection of new experiences for members, including events in San Francisco, Dallas, Boston, Chicago, Los Angeles, New York City, and more*.

Dates, ticketing information, and more D23 events will be announced throughout the year, including new, member special events in Orlando. All events and dates are subject to change.

Cinderella lights up the Palace of Fine Arts
On March 12, D23 Members will be treated to a screening of Walt Disney Studios’ upcoming release Cinderella, followed by a reception exclusively for D23 Gold Members. The event will take place following The Walt Disney Company 2015 Annual Meeting of Shareholders at the Palace of Fine Arts in San Francisco. (Members do not need to be shareholders to attend the screening.)

Special Screening Events on The Walt Disney Studios Lot
Starting this month, D23 kicked off another year of memorable screenings designed with fans in mind. On February 8, D23 screened 101 Dalmatians, which included the premieres of two new short films; a panel featuring Disney Legend and animator Floyd Norman, Lisa Davis (voice of Anita), and Mimi Gibson (voice of Lucky); a special gift; and more. Other experiences on the Studio lot in 2015 will include The Parent Trap and a special 75th anniversary celebration of Pinocchio, as well as a screening of the “Peoples and Places” featurette Disneyland, U.S.A., with special guests in honor of Disneyland’s 60th anniversary.

D23’s Lunch With a Disney Legend
Back by popular demand, in 2015, D23 will continue these intimate gatherings with Disney Legends this spring and fall. In 2014, D23 Members joined such Legends as Marty Sklar, Floyd Norman, and Bill Farmer for private luncheons on The Walt Disney Studios lot.

D23 Member VIP Studio Tours
A new event for 2015, D23 will offer this unique experience only to D23 Gold Members. It will include a tour of the Studio during a working day on the lot, along with a special lunch with a Disney Legend and a unique VIP gift. Each limited-capacity experience will include new tour stops and unique moments sure to bring smiles to Disney fans. Events will be held on May 29 with Walt Disney Archives founder Dave Smith and November 6 with a Disney Legend to be announced soon.

D23 is also bringing more events to members across the country in 2015:

The Hunchback of Notre Dame VIP Experience
On March 15, D23 Members are invited to see the new theatrical production of The Hunchback of Notre Dame at the Paper Mill Playhouse in New Jersey. D23 Members save 20 percent on their tickets, receive a limited-edition pin, and will enjoy a post-show talk-back with the musical’s Academy Award®-winning lyricist Stephen Schwartz.

Breakfast on Broadway
A select number of D23 Gold Members will enjoy private shopping at Disney Store Times Square on March 14 with a special discount; a continental breakfast at the New Amsterdam Theatre, home to the Broadway hit Aladdin; and a gift at this exclusive, complimentary event.

D23 Member Nights at Newsies—On Tour
This year, D23 Members in San Francisco, Los Angeles, Dallas, Washington, D.C., Boston, and Toronto are invited to see the Tony®-Award winning show, with premium seats on special nights and a talk-back with the cast following the show. (Some shows already sold out.)

Disney Store Member Mixers
Since 2013, D23 has given members a peek at reimagined Disney Stores across the country—from Kansas and Nevada to Michigan and Texas. This year Disney Store will once again invite D23 Members for exclusive mornings of shopping, discounts, games, and goodies at new locations in Riverside, Calif., Lexington, Ky., Raleigh, N.C., Burlington, Mass., and many more.

Advance Screenings
In 2014, D23 Members were able to attend previews of Maleficent, Big Hero 6, and Into the Woods in cities such as New York, Orlando, Chicago, and Atlanta. This year, in partnership with Walt Disney Studios, D23 will screen a selection of upcoming releases.

D23 Expo 2015
The biggest Disney event of all takes place August 14–16 at the Anaheim Convention Center when all the wonderful worlds of Disney come together for three magical days. From sneak peeks, concerts, and exhibitions to celebrities, Disney luminaries, and more, there’s something for every Disney fan at the D23 Expo. Tickets are available now at D23Expo.com.

*All events and dates are subject to change.