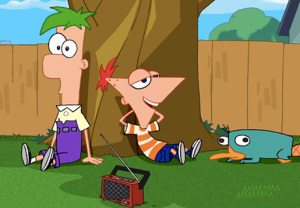 Phineas and Ferb, the angular brothers who found plenty of adventures in their backyard on Disney XD, will wrap it up June 12 after 126 episodes and well over 104 days of summer vacation.

But fear not, fans of their helpful spy Perry the Platypus or bumbling evildoer Dr. Hans Doofenschmirtz: Creators Dan Povenmire, the voice of Hans, and Jeff “Swampy” Marsh are creating a new series for the network to debut in 2017.

First, Phineas will get a proper sendoff with a 73-hour marathon of every episode, starting June 9 (8 p.m. ET/PT), that culminates June 12 with series finale “Last Day of Summer.” (A special about Perry and his fellow animal agents, “The O.W.C.A. Files,” is due this fall).

Phineas premiered in 2007, won three Emmy Awards and for a time, says Disney, citing Nielsen data, was the top-rated animated series among tweens, thanks to multiple cable reruns, which will live on.