Super Bowl hero James White had an extraordinary performance to lead his team to a record-setting Super Bowl title Sunday night in Houston, so it shouldn’t be a surprise what he’s going to do next.

White was the hero of the game, catching 14 passes for 110 yards and scoring three touchdowns, including the game-winner in overtime, in his team’s 34-28 win, completing the greatest comeback in Super Bowl history. So naturally after the victory – the first overtime win ever in the Super Bowl – White announced that he is coming to Disney World to celebrate, continuing a Disney tradition that has endured for 30 years.

Disney has a magical parade planned for Monday afternoon at Magic Kingdom Park to celebrate the championship win. White, the team’s star running back, will be joined in the parade by Mickey Mouse and his pals, who will be engulfed in a sea of confetti as they proceed down Main Street, U.S.A. 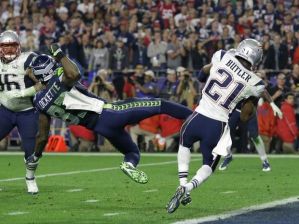 Wide receiver Julian Edelman and cornerback Malcolm Butler of the Super Bowl XLIX champions, New England Patriots, are scheduled to celebrate their victory Monday at the Disneyland Resort. After the 28-24 victory over the Seattle Seahawks in Phoenix, Edelman and Butler stood on the field and shouted, “We’re Going to Disneyland!” The scene will be featured in Disney Parks’ annual Super Bowl commercial, airing for the next several days.

Here is the video of the commercial.

The two will receive a hero’s welcome when they join Mickey Mouse in a cavalcade at noon today at Disneyland.

Edelman, a wide receiver, finished the game with nine catches for 109 yards and a touchdown.

Butler, who plays cornerback, made three tackles and sealed the game for the Patriots when he intercepted a pass from Seahawk quarterback Russell Wilson with 20 seconds remaining in the game.