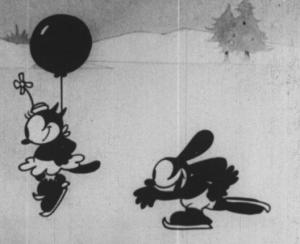 The black and white silent film features Disney’s first cartoon character, Oswald the Lucky Rabbit, ice skating across a frozen pond along with other cartoon animals. Oswald, who bears a resemblance to Mickey Mouse, is seen as a precursor to Disney’s most famous creation.

According to the BFI, “Oswald the Lucky Rabbit was invented by Walt Disney in 1927 and was loved for his mischievous and rebellious personality. A number of other films do survive but Sleigh Bells has been, until now, a lost film, unseen since its original release. The animation in the film was accomplished by Walt Disney and Ub Iwerks, both of whom went on to create the character of Mickey Mouse.”

The BFI and Disney have now taken the necessary steps to preserve and restore the rediscovered footage that gives insight into Disney’s storied history.

“What a joyful treat to discover a long-lost Walt Disney film in the BFI National Archive and to be able to show Sleigh Bells to a whole new audience 87 years after it was made,” said Robin Baker, Head Curator, BFI National Archive. “The restoration of this film will introduce many audiences to Disney’s work in the silent period–it clearly demonstrates the vitality and imagination of his animation at a key point in his early career.”

Andrew Millstein, President of Walt Disney Animation Studios, which oversaw the restoration, agreed, adding, “The Oswald shorts are an important part of our Studios’ history, and we have been working with film archives and private collectors all around the world to research the missing titles.”

Oswald the Lucky Rabbit, one of Walt Disney’s earliest cartoon stars, has had a presence at Disney California Adventure park for the past couple of years, from those delightful rabbit ear hats to the Oswald ice cream sundaes at Clarabelle’s. Now, Oswald himself is set to come home to Disneyland Resort!

Oswald made his film debut September 5, 1927, in the cartoon short “Trolley Troubles.” Walt Disney went on to produce 26 Oswald the Lucky Rabbit shorts, before losing the rights to the character in 1928. It was that experience that inspired the creation of Mickey Mouse, and the rest as they say, is history. Oswald finally returned to the Disney family in 2006 and made his first Disney Parks appearance earlier this year at Tokyo DisneySea.

Later this month, you’ll finally be able to meet Oswald on Buena Vista Street at Disney California Adventure park. Just look for the lucky little rabbit strolling along the sunny side of the street, starting September 14!