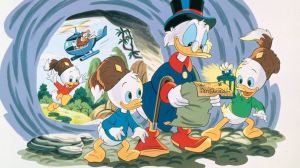 Children of the ’80s, rejoice.

“DuckTales,” the beloved animated series, will be remade for a new audience, Disney announced today.

“‘DuckTales’ has a special place in Disney’s TV animation history,” said Marc Buhaj, Disney XD’s Senior Vice President of Programming and General Manager, in a statement. “It drew its inspiration from Disney Legend Carl Barks’ comic books and through its storytelling and artistic showmanship, set an enduring standard for animated entertainment that connects with both kids and adults. Our new series will bring that same energy and adventurous spirit to a new generation.”

The new series will again feature the adventures of Scrooge McDuck and his grandnephews, Huey, Dewey, and Louie, as well as Donald Duck.

The reboot of the show, which originally aired from 1987-1990, is set to launch in 2017 on Disney XD channels worldwide