D23 and shopDisney have announced that D23 members will receive an exclusive 20% discount at shopDisney until October 31.

We have some exciting news to announce to ALL of our D23 Members!

Disney store and shopDisney.com have given us an exclusive discount on all of the Disney items we love. For a limited-time only take 20 percent off of your purchase of $65.00 or more. Start your Holiday shopping early! But don’t wait… this offer is only good through Halloween.

For the discount code and other particulars, please go to D23’s website.

Whether you’re looking to start your own PANDORA Jewelry collection or adding to your current series, Downtown Disney District soon will have a new shopping destination for you. Famous for its beauty and style, PANDORA will offer elegant, hand-finished jewelry in sterling silver and 14k gold with genuine gemstones, cultured pearls, Murano glass and cubic zirconia stones. Designed to inspire embracing the self-creator within, PANDORA Jewelry allows guests to explore and craft their unique personal story.

Sammy Duvall’s Curl Surf, also opening late fall 2016, is all about celebrating the surf lifestyle, culture and fashion. The store will feature top surf brands, including Hurley, Roxy, Billabong, Nixon, Duvin and Quiksilver, footwear by TOMS, Reef and Vans, and a large selection of Oakley, Ray-Ban and Nixon watches. If you’re a surfer of a fan of surf, Curl Surf has everything you need in the way of apparel and accessories. 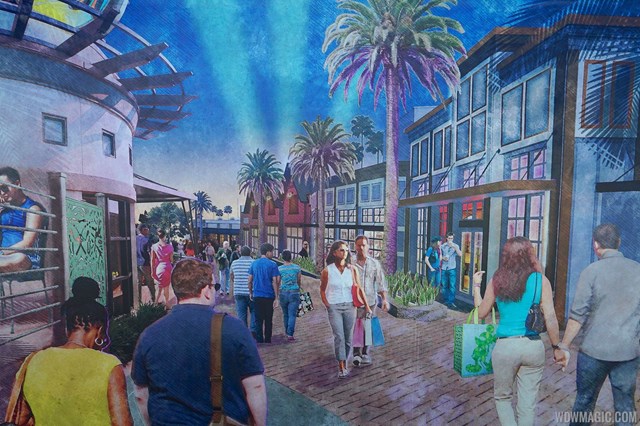 A new surge in shopping at Disney Springs will begin May 15. That’s the day stores will begin opening in the new Town Center area of Walt Disney World’s remodeled retail center.

Town Center shops will open in phases, Disney has said. The majority of the new stores will be operating by July 1, according to a post on the official Disney Parks Blog.

Town Center is the latest step in the Disney Springs project, which re-imagined the Downtown Disney area as a small, turn-of-the-century Florida town. This retail district is being constructed in what was a portion of the Downtown Disney parking lot, near the entrance to the old Mannequins nightclub, which is now Morimoto Asia restaurant.

Disney officials have said they expect Disney Springs to be complete this year. Among the elements still under construction are a refurbished Planet Hollywood restaurant, STK steakhouse and a second parking garage.