A spokesperson for the Disneyland AP account on Twitter confirmed this week that visitors over 21 years old will only be allowed to drink in the confines of the upcoming Oga’s Cantina at the new Star Wars: Galaxy’s Edge attraction.

Hey. Did we ever get told whether or not when Galaxy’s Edge opens @Disneyland that alcohol is allowed throughout the park? #ihopenot @DisneylandAP

Disneyland AP
Hello, Rachel! At this time, Guests will be required to stay in Oga’s Cantina while enjoying alcoholic beverages.

Earlier today Walt Disney World announced three new concepts along with some concept art that will be included in the multi-year transformation of Epcot.  This transformation was originally announced at the D23 Expo in 2017.

The ongoing evolution of Epcot includes plans for a play pavilion that’ll be unlike anything you’ve ever seen at the park. This new space will be devoted to playful fun and feature an innovative city that’ll come to life under the dome of the un-named pavilion previously known as Wonders of Life. The pavilion’s city will be bursting with interactive experiences, your favorite Disney characters, hands-on activities and engaging entertainment when it opens just in time for the 50th anniversary of Walt Disney World Resort!

“This innovative, new pavilion is beyond anything we’ve ever created and is completely unique to Epcot,” said Zach Riddley, portfolio executive, Walt Disney Imagineering. “Built on the power of play, it introduces an immersive and interactive ‘city’ where you can explore, create, and interact with some of your favorite Disney characters. This is an experience worthy of our bold vision for Epcot – and another signature element of our transformation.”

Walt Disney World also announced changes to the entrance of Epcot.  As you can see above the plaza will welcome guests with new pathways, sweeping green spaces and a newly reimagined fountain.  From the announcement and the concept art this new design will pay homage to the original park entrance with fresh takes on classic elements.

In case you were wondering, Disney announced that the Leave A Legacy photos will be moving into a beautiful setting just outside the park’s gateway.  Disney also mentioned that significant redevelopment will also begin between Spaceship Earth attraction and the World Showcase Promenade.  Details will be announced at a later date….my guess is that we’ll probably hear something about this at the D23 Expo in August.

Guests will soon be able to look what’s coming at a new Experience Center coming to Epcot later this year. The Experience Center will be located in the Odyssey Events Pavilion and feature interactive exhibits to help visualize park projects throughout this unprecedented period of transformation.

Many of us have been wondering whether the transformation of Epcot was still going to happen since we haven’t seen or heard anything…even concept art since the project was announced in July of 2017 at the D23 Expo.

I for one, and from what I’ve seen and read I’m not the only one, am very excited about this exciting announcement.

Dave Smith, the founder of Walt Disney Archives, died earlier today at the age of 78.

The Walt Disney Company honored Dave with this –

Walt Disney Archives founder Dave Smith passed away in Burbank, California, on February 15, 2019. He was 78. Dave dedicated his four-decade career at The Walt Disney Company to preserving Disney’s precious treasures from film, television, theme parks, and beyond. Named a Disney Legend in 2007, Dave was beloved by fans around the world for his wide knowledge of the Company’s rich history, which he shared in books and through his popular magazine column “Ask Dave.”

“I’m deeply saddened to learn of Dave Smith’s passing,” said Bob Iger, Chairman and Chief Executive Officer, The Walt Disney Company. “He was the unsung hero of Disney’s history who, as our first archivist, spent 40 years rescuing countless documents and artifacts from obscurity, investing endless hours restoring and preserving these priceless pieces of our legacy, and putting them in context to tell our story. Dave was a true Disney Legend, and we are indebted to him for building such an enduring, tangible connection to our past that continues to inspire our future.”

Dave was hired in 1970 by Walt’s brother—and The Walt Disney Company co-founder—Roy O. Disney, and his first responsibility was cataloguing every item inside Walt’s office suite, which had been left untouched after Walt’s passing four years prior. Thanks to Dave’s meticulously detailed notes and records, the Archives was able to restore the suite in 2015, and today Disney employees are able to visit and draw inspiration from this remarkable space. During his time as Disney’s Chief Archivist, Dave grew the Archives from a simple one-person department to a model among corpo­rate archives. He was regarded by fans and historians as the final authority on matters of Disney history, and was an active member of the Society of California Archivists. He served from 1980 to 2001 as Executive Director of the Manuscript Society, an international association of collectors, dealers, librarians, archivists, and others interested in manuscript material.

Born and raised in Pasadena, California, the child of librarians and educators, Dave earned a B.A. in history and a Master’s Degree in Library Science from the University of California at Berkeley. Before coming to Disney, he gained library and archives experience working in the Manuscript Department of the Huntington Library in San Marino, California, interning at the Library of Congress in Washington, D.C., and serving on the staff of the Research Library at U.C.L.A.

Dave wrote extensively about Disney history, with regular columns in Disney fan publications and websites, as well as authoring, co-authoring, and editing numerous articles and books on Disney history, including the official Disney encyclopedia Disney A to Z, Disney: The First 100 Years, The Quotable Walt Disney, Disney Trivia from the Vault, and The Ultimate Disney Trivia Books 1, 2, 3, and 4.

In October 2007, Dave was honored with the prestigious Disney Legend Award. A resident of Burbank, California, Dave retired in 2010 after his 40th anniversary with The Walt Disney Company and continued working for the next nine years as a consultant for the Company, with the title of Chief Archivist Emeritus.

Our condolences and thoughts go out to his family and friends at this time.

Dave Smith was a true Disney Legend. I’ve met him once and he was the real deal. I loved his books and his ‘Ask Dave’ contributions in The D23 Magazine twenty-three. Dave will be missed.

Ron W. Miller, former President and CEO of The Walt Disney Company and producer of many Disney films, has passed away at the age of 85.

Miller came to the company via his wife, Diane Disney, Walt’s daughter. The two met at the University of Southern California.  They were married in 1954.

Miller told entertainment reporter Dale Pollock in 1984, “”My father-in-law saw me play in two football games when I was with the Los Angeles Rams. In one of them, I caught a pass and Dick ‘Night Train’ Lane let me have it from the rear. His forearm came across my nose and knocked me unconscious. I woke up in about the third quarter. At the end of the season, Walt came up to me and said, ‘You know, I don’t want to be the father to your children. You’re going to die out there. How about coming to work with me?’ I did and it was a wise decision on my part.”

Ron Miller, ran Walt Disney Productions in the early to mid 80’s. Among other things, he is the progenitor of the Disney Channel and Touchstone Pictures. He also greenlit and produced films like “Pete’s Dragon”, “Tron”, “The Black Caldron”, “The Great Mouse Detective” and “Never Cry Wolf”; seriously, check the latter out if you haven’t seen it, an excellent Carrol Ballard film. He also supported a young Tim Burton by producing the original live-action “Frankenweenie”.

After being forced out of the company by Roy E Disney and Saul Steinberg, he and Diane moved up to the Bay Area and opened Silverado Vineyards. He helped Diane, along with their children, establish the Walt Disney Family Museum at the Presidio in San Francisco. He has overseen the museum and associated foundation since Diane’s passing in 2013. 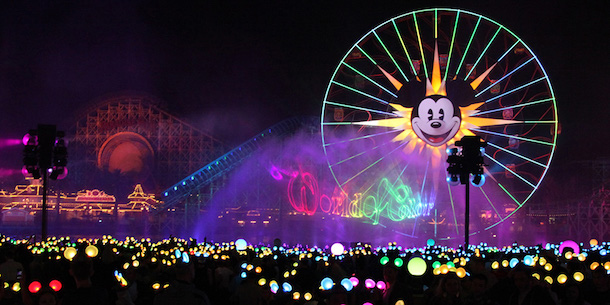 It looks like World of Color, the fan-favorite nighttime water-based show at Disney California Adventure,  is finally making its long awaited return. 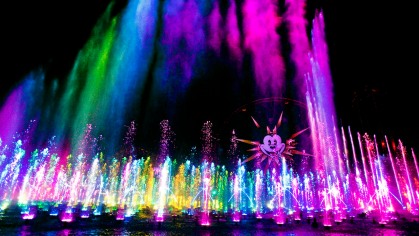 The special ticket event includes reserved seating in Paradise Gardens Park and access to a dessert selection and sparkling beverages and costs $79.