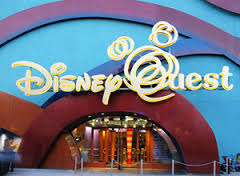 The end is drawing near the once-popular DisneyQuest arcade at Walt Disney World.

Disney announced today that the 5-story center of “gaming awesomeness” at Disney Springs will close for good on July 3.

The NBA Experience will open in the soon-to-be vacant space at the resort’s open-air shopping and entertainment complex.

The end of DisneyQuest, which opened in 1998, has been expected, but delayed multiple times before the complex finally received its final death sentence.

Home to some of the first immersive virtual reality rides like CyberSpace Mountain, DisneyQuest was the model for what Disney hoped would be a franchise with locations all over the country.

However, when attendance dipped in the Central Florida location, as well as one in Chicago, the plans were quickly canceled.

So if you’re an old-school or new-school gamer, you better hurry to get into the action before DisneyQuest closes its doors for good.